Today I received an email in my inbox from Pentaho and Accenture's Innovation Center for Open Source. The email was titled "Let Accenture show you how to save big on BI, with Pentaho". Here's a link if your interested: http://www.pentaho.com/events/20091027_Accenture_webcast/

...Pentaho, I think I've written about them before...

After receiving the email and skimming through the webcast, I sent an email to the team here at my shop, containing something similar to the following.

Close to two years ago we took a look around the open source reporting industry to determine which platform we should standardize on for our reports in the portal environment. At the time we chose Jasper reports instead of Pentaho as it looked like a leader, creating reports using iReports (desktop client tool) was similar to tools like Crystal/Actuate reports, and a few software development folks have had experience with deploying Jasper Reports in Java applications.

With all that said I'm continually bombarded with emails like the below where folks are seriously looking at or investing in Pentaho. I am also seeing some industry traffic on BIRT, particularly with it tying into Actuate. I'm not seeing any industry traffic on Jasper.

I took a 10 minute test drive on Pentaho's online BI demo and it's very impressive. I believe this used to be back ended by a JBOSS portal but I'm not sure if it is anymore. The following link illustrates the differences between the Community edition of Pentaho BI and their Enterprise Edition version: http://www.pentaho.com/docs/pentaho_bi_suite_enterprise_edition.pdf

....some other proprietary comments here....

At my shop we've been using Pentaho Data Integrator for a couple years now and it's a very neat "free" tool. I checked Google Trends to see if I was crazy to see if Pentaho is really becoming more popular and sure enough it looks true (see chart below). 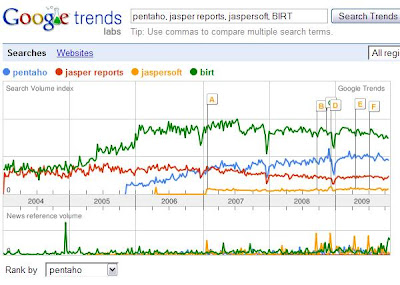